The Northern Lights in Scotland

The Northern Lights in Scotland – Scotland’s Most Authentic Mystery

The Loch Ness monster is Scotland’s most enduring mystery, however the Northern Lights “Aurora Borealis” the name of a light phenomenon often seen in the more northern regions of Scotland is “the most authentic mystery”, Because with good timing you are certain to see them annually during the crisp clear winter months early spring and late Autumn months. The lights have been around since the Earth formed an atmosphere, the Dinosaurs saw them, early humans saw them and our descendants will also see them. The scientific name for the phenomenon is “Aurora Borealis”, the Aurora for short

We are currently within a maximum solar cycle peak forecast promising the chance of extra special light shows in 2022 and 2023. 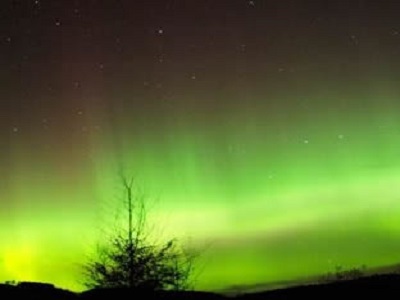 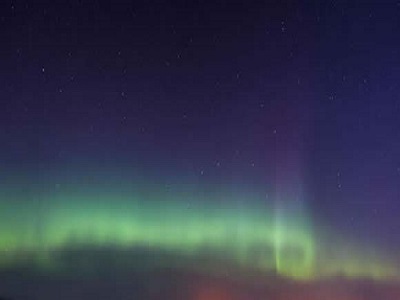 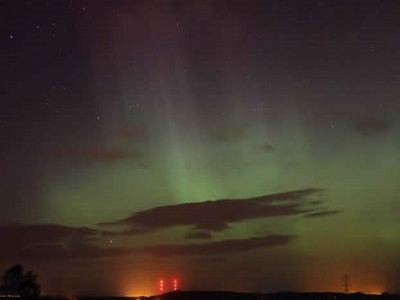 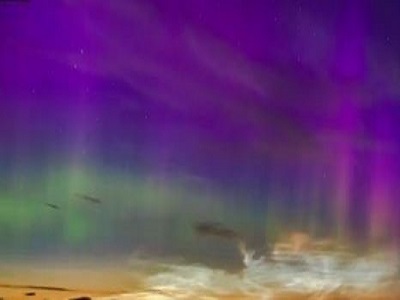 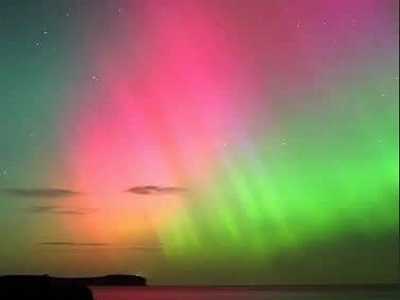 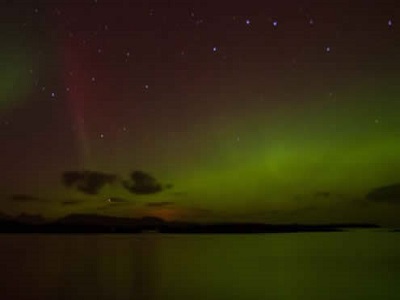 What Causes the Northern lights

Auroral mechanism Auroras are now known to be caused by the collision of charged particles (e.g. electrons), found in the magnetosphere, with atoms in the Earth’s upper atmosphere (at altitudes above 80 km) These charged particles are typically energized to levels between 1 thousand and 15 thousand electronvolts and as they collide with atoms of gases in the atmosphere, the atoms become energized. Shortly afterwards, the atoms emit their gained energy as light (see Fluorescence). Light emitted by the Aurora tends to be dominated by emissions from atomic oxygen, resulting in a greenish glow (at a wavelength of 557.7 nm) and – especially at lower energy levels and at higher altitudes – the dark-red glow (at 630.0 nm of wavelength). Both of these represent forbidden transitions of electrons of atomic oxygen that, in absence of newer collisions, persist for a long time and account for the slow brightening and fading (0.5-1 s) of auroral rays. Many other colors – especially those emitted by atomic and molecular nitrogen (blue and purple, respectively) – can also be observed. These, however, vary much faster and reveal the true dynamic nature of auroras. As well as visible light, auroras emit infrared (NIR and IR) and ultraviolet (UV) rays as well as X-rays (e.g. as observed by the Polar spacecraft). While the visible light emissions of auroras can easily be seen on Earth, the UV and X-ray emissions are best seen from space, as the Earth’s atmosphere tends to absorb and attenuate these emissions.

Typically the aurora appears either as a diffuse glow or as “curtains” that approximately extend in the east-west direction. At some times, they form “quiet arcs”; at others (“active aurora”), they evolve and change constantly. Each curtain consists of many parallel rays, each lined up with the local direction of the magnetic field lines, suggesting that aurora is shaped by the earth’s magnetic field. Indeed, satellites show auroral electrons to be guided by magnetic field lines, spiraling around them while moving earthwards. The earth is constantly immersed in the solar wind, a rarefied flow of hot plasma (gas of free electrons and positive ions) emitted by the sun in all directions, a result of the million-degree heat of the sun’s outermost layer, the solar corona. 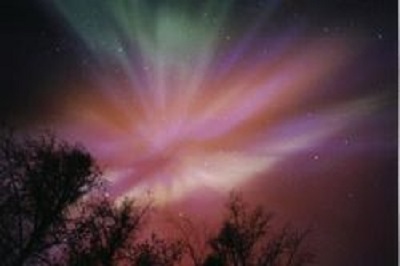 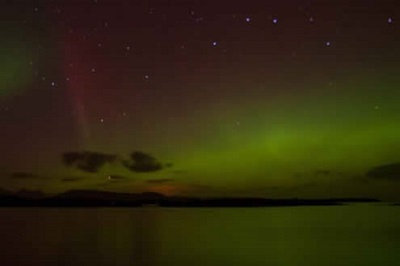 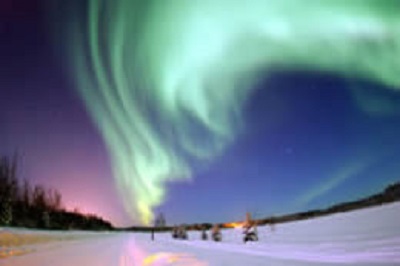 The solar wind usually reaches Earth with a velocity around 400 km/s, density around 5 ions/cc and magnetic field intensity around 2-5 nT (nanoteslas; the earth’s surface field is typically 30,000-50,000 nT). These are typical values. During magnetic storms, in particular, flows can be several times faster; the interplanetary magnetic field (IMF) may also be much stronger. The IMF originates on the sun, related to the field of sunspots, and its field lines (lines of force) are dragged out by the solar wind. That alone would tend to line them up in the sun-earth direction, but the rotation of the sun skews them (at Earth) by about 45 degrees, so that field lines passing Earth may actually start near the western edge (“limb”) of the visible sun a numerical simulation of the solar wind illustrates that: Solar wind forecast. The Far North of Scotland has the same latitude as Moscow (Russia) and Stavenger (Norway) but is more easily accessible. It’s advantage of Northern latitude along with the complete absence of street lamps mean regular sightings of the Northern lights “Aurora Borealis” With good timing you have a chance of experiencing one of the world’s most magnificent natural phenomena: the Northern Lights. The Northern night sky dancing with red, yellow, green, blue and violet streamers, arcs and rays. The best time to see the Northern lights are the crisp, clear winter nights from September through to April between 10 pm and 3 am. 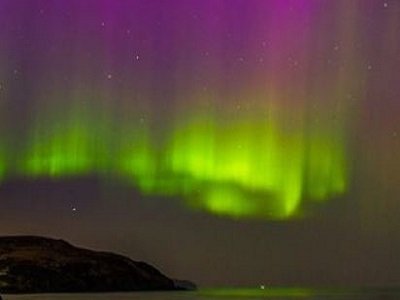 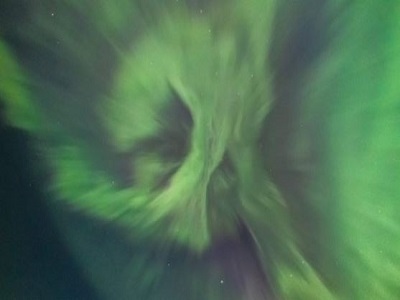 Accommodation to see the Northern Lights 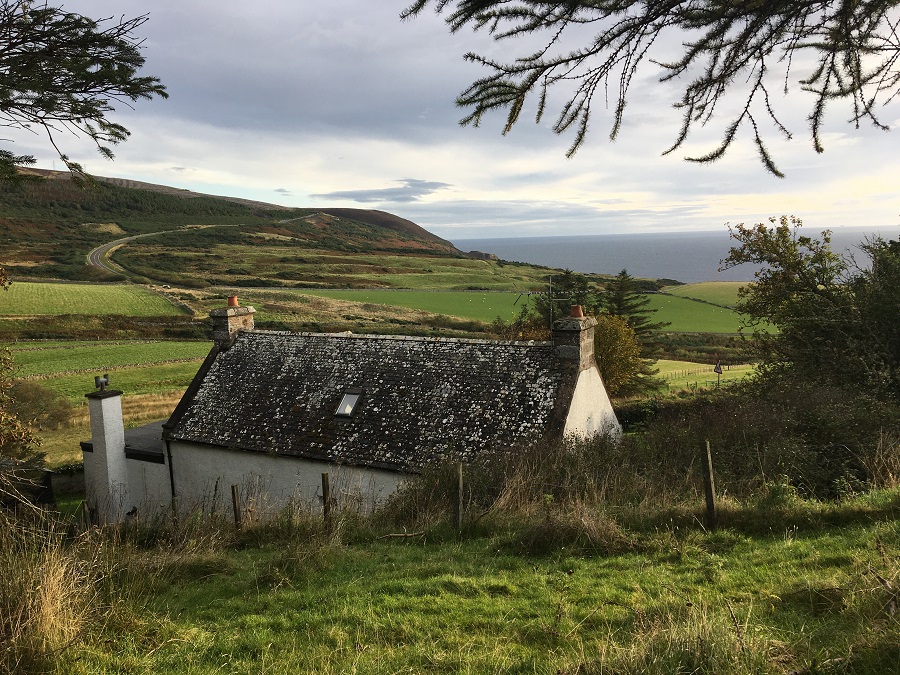 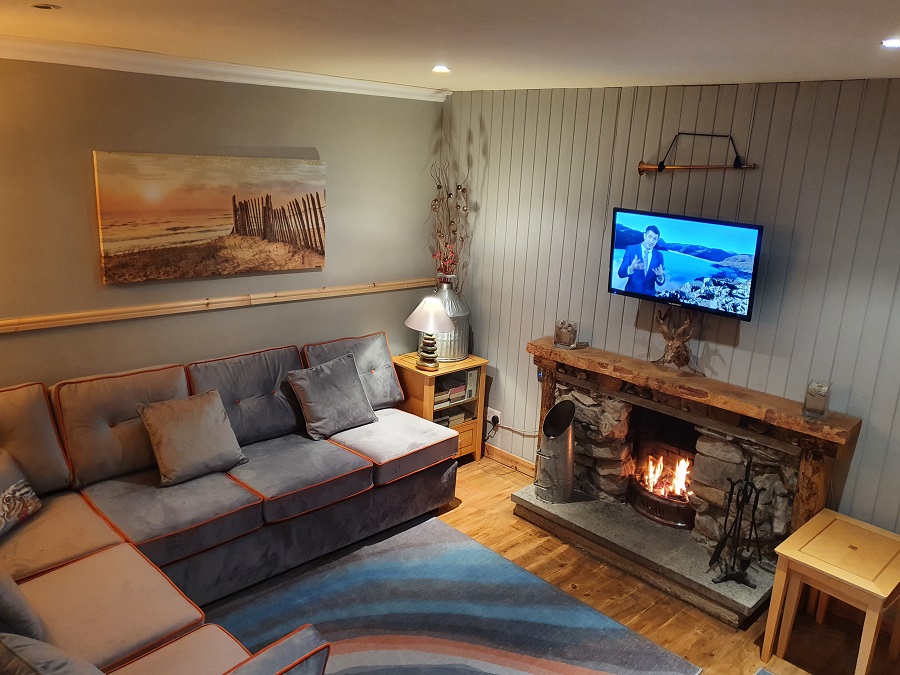 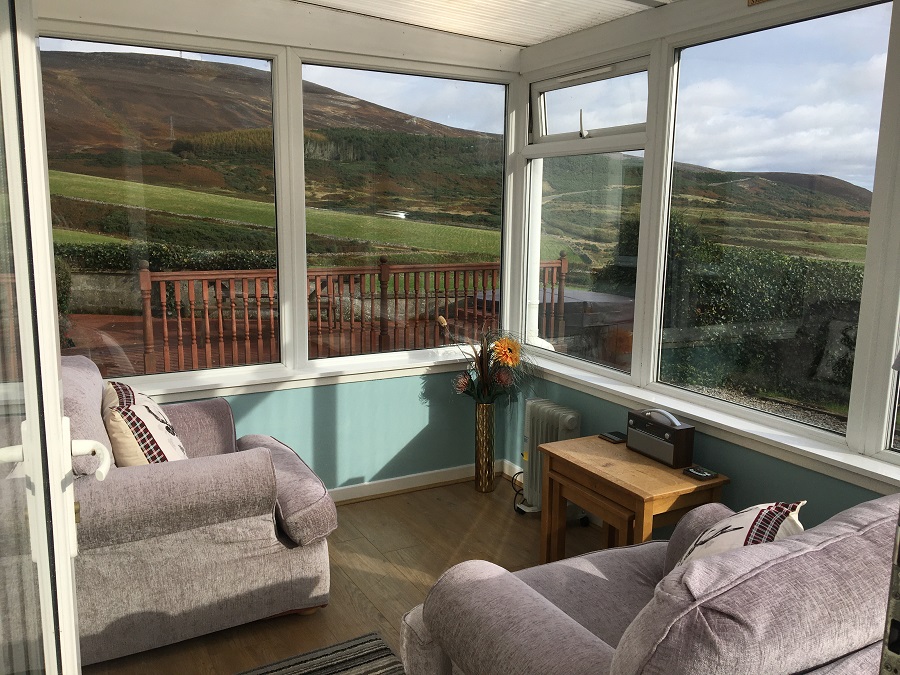 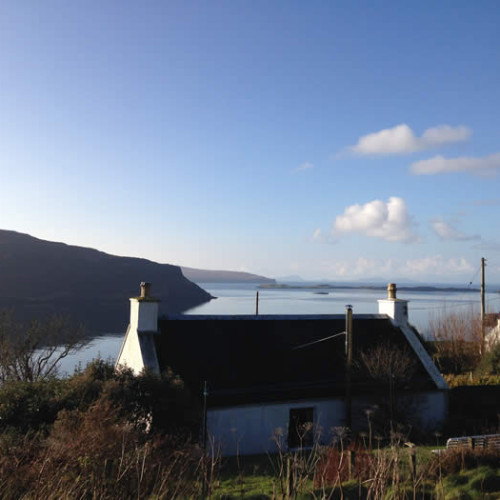 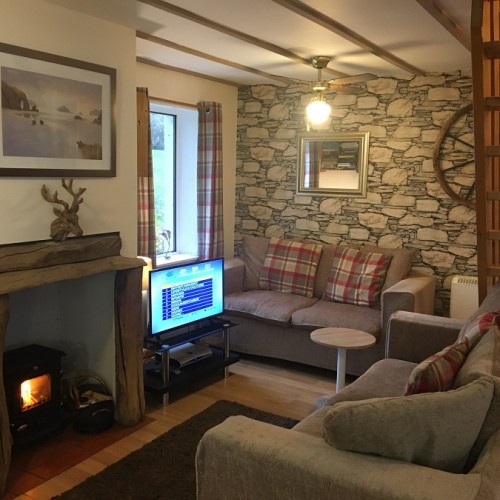 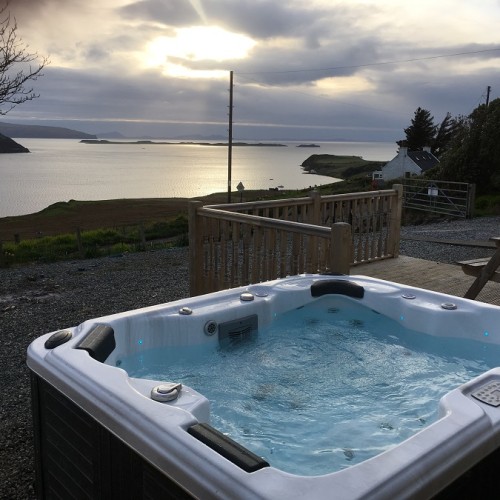 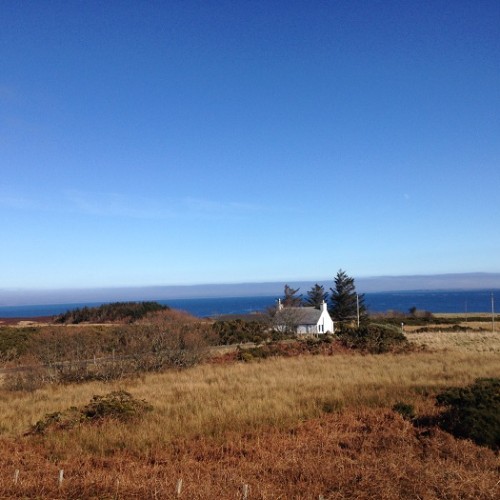 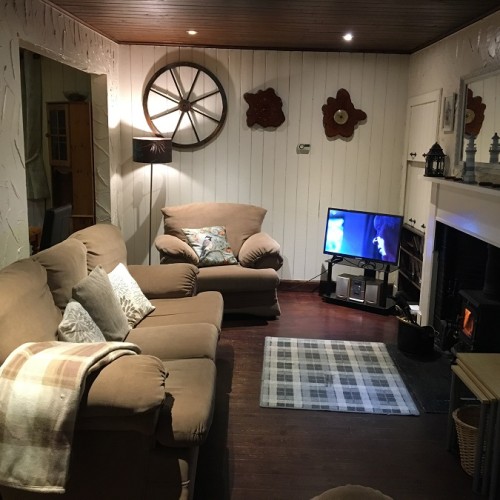 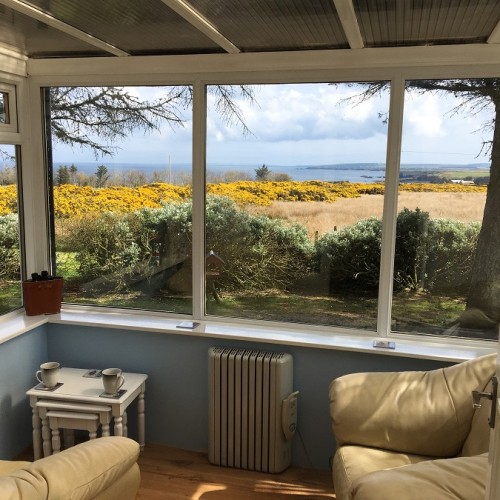 General Booking enquiry – please note this does not constitute a booking

What Causes the Northern lights – continued

The earth’s magnetosphere is the space region dominated by its magnetic field. It forms an obstacle in the path of the solar wind, causing it to be diverted around it, at a distance of about 70,000 km (before it reaches that boundary, typically 12,000-15,000 km upstream, a bow shock forms). The width of the magnetospheric obstacle, abreast of Earth, is typically 190,000 km, and on the night side a long “magnetotail” of stretched field lines extends to great distances.When the solar wind is perturbed, it easily transfers energy and material into the magnetosphere. The electrons and ions in the magnetosphere that are thus energized move along the magnetic field lines to the polar regions of the atmosphere causing the aurora. The aurora is a common occurrence in the ring-shaped zone. It is occasionally seen in temperate latitudes, when a strong magnetic storm temporarily expands the auroral oval. Large magnetic storms are most common during the peak of the eleven-year sunspot cycle or during the three years after that peak. However, within the auroral zone the likelihood of an aurora occurring depends mostly on the slant of IMF lines (known as Bz, pronounced “bee-sub-zed” or “bee-sub-zee”), being greater with southward slants. Geomagnetic storms that ignite auroras actually happen more often during the months around the equinoxes. It is not well understood why geomagnetic storms are tied to the earth’s seasons when polar activity is not. It is known, however, that during spring and autumn, the earth’s and the interplanetary magnetic field link up. At the magnetopause, Earth’s magnetic field points north. When Bz becomes large and negative (i.e., the IMF tilts south), it can partially cancel Earth’s magnetic field at the point of contact. South-pointing Bz’s open a door through which energy from the solar wind can reach Earth’s inner magnetosphere. The peaking of Bz during this time is a result of geometry. The interplanetary magnetic field comes from the sun and is carried outward the solar wind. Because the sun rotates the IMF has a spiral shape. Earth’s magnetic dipole axis is most closely aligned with the Parker spiral in April and October. As a result, southward (and northward) excursions of Bz are greatest then. However, Bz is not the only influence on geomagnetic activity. The Sun’s rotation axis is tilted 8 degrees with respect to the plane of Earth’s orbit. Because the solar wind blows more rapidly from the sun’s poles than from its equator, the average speed of particles buffeting Earth’s magnetosphere waxes and wanes every six months. The solar wind speed is greatest — by about 50 km/s, on average — around September 5 and March 5 when Earth lies at its highest heliographic latitude. Still, neither Bz nor the solar wind can fully explain the seasonal behavior of geomagnetic storms. Those factors together contribute only about one-third of the observed semiannual variation. 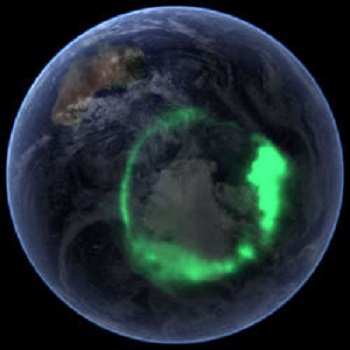 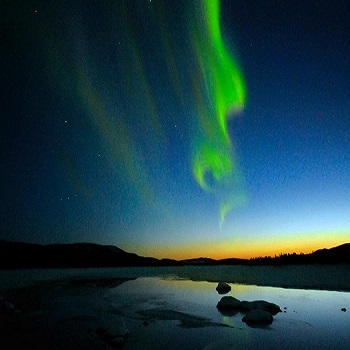 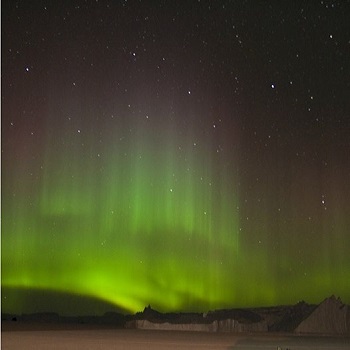 The Northern Lights in Scotland – Map of the best viewing areas

The best tool available for predicting when the Northern Lights are most likely to appear is the Live “Aurora Service” This a free northern lights information service based in Scandinavia, run by volunteers who give a lot of free time to create and maintain this website to help people in Northern Europe see the Northern Lights. Unlike many other aurora websites, they are actually aurora watchers themselves, and are regularly standing in a dark field in the middle of the night.

There is also the Aurora Hunter Other previous articles of note covering sightings of the Northern Lights in Scotland include STV Scotland, Channel 4, The Washington Post

Those simply looking for Planet’s, Star’s and Night sky gazing can maximise their outlook and viewing pleasure by heading to Remote or clear Coastal areas of Northern Scotland – Please go to dedicated page Sky Watching Holidays in Scotland

The Aurora Live up to date forecast and activity page. Also the excellent facebook page Aurora Watch UK. The Aurora Page Information, links and images about the Aurora Borealis or Northern Lights

At 10pm on Wednesday 29th March on a crystal clear night we saw the “Northern Lights” They were amazing. They lasted 45 minutes before the sky faded back to black. What a fantastic holiday! Thank you so much – we’d like to come back soon – Paul, Anne, Lauri, Mark and Fergal ! Flew and stayed here in January 16th to 23rd and on the 18th January we saw the “Northern Lights” Started as a Glow over the Spinney then turned Yellow and Orange pulsating Lights. It was amazing, they returned at 9pm that evening and again at 1am next morning. Nothing this time but the night skies were still amazing. The full moon rose in the SE 9pm 22nd March and 10pm 23rd March – bright orange and so clear. We felt we could reach up and touch the stars, it was fantastic – Keith and Kathy Clark, Warwickshire

See the Northern Lights – the most popular Cottages in Scotland 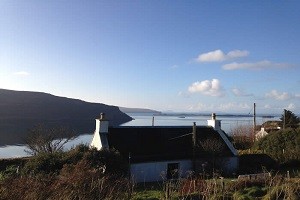 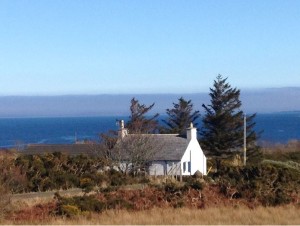 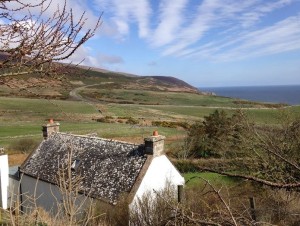 – North Coast 500 Beach Cottage In an elevated position and just a stones throw from the Beach with spectacular views over Scourie Bay, this much-loved property on the stunning North North Coast 500 route is ideal for large families looking for a remote getaway. Sleeps 6 Sorry no Pets 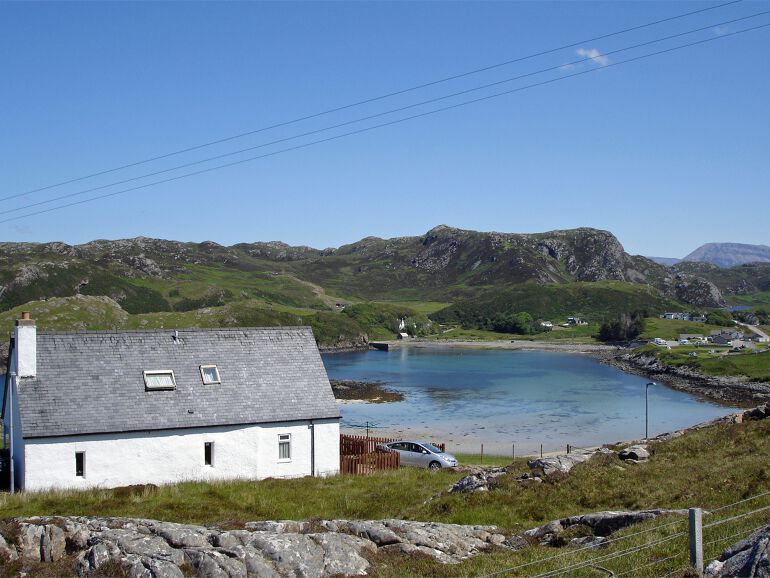 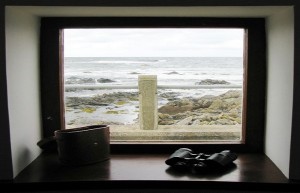 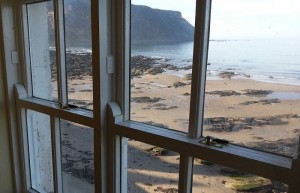 Orkney Islands This unique detached cottage is set on the the north east side of West Mainland of the Orkney Islands with spectacular countryside and sea views. Sleeps up to 7 Sorry no Pets – Orkney Isles Holiday Cottage 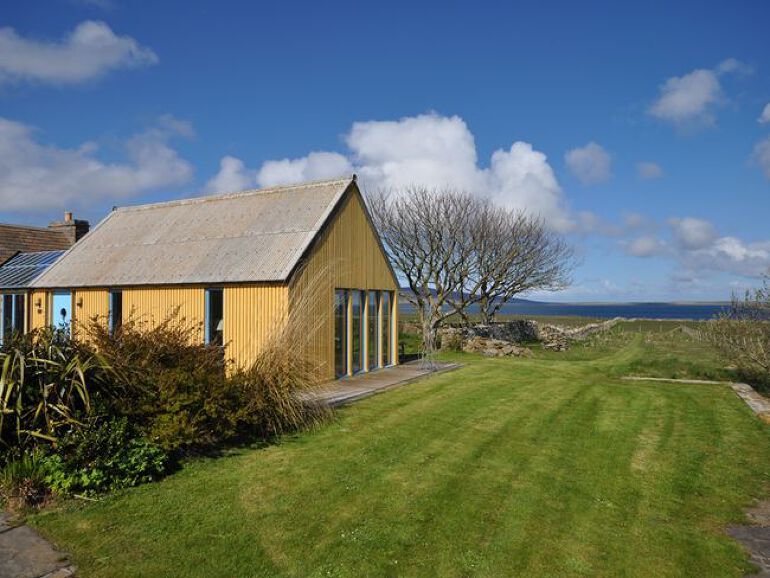